Harrison Center for the Arts Performance Series ’05-’06
Funded by the Indianapolis Cultural Development Commission and private donations.  Including performances of the following four pieces…

Path of the Goddess

All Who Wander Are Not Lost

Harrison Center for the Arts, April 2007

Performed and choreographed by PJ Maske, with and for art by Elyce Elder.

Trip on the High Seas

An evening of music and performance based around songs by Ebenezer and the Hymnasters featuring dancer/choreographer Katie Bacone, performer Christa Shoot and readings by PJ Maske. 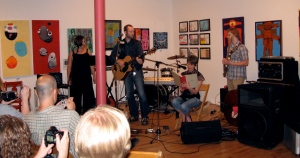 Leda and the Swan

See March 24, 2009 post for more on performances of Leda and the Swan.